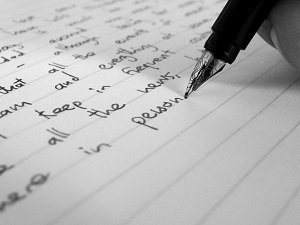 A good essay may always be determined by a set of the basic characteristics. Despite the type, topic or format, each essay should have a clearly defined central theme with several main points to provide support and initiate discussion. Also, it should consist of an introduction, main body, and conclusion. The introduction has to begin with an attention-grabbing hook and end with a thesis statement. Since thesis represents the main claim of the essay, sometimes it is better to include it after the paper is finished. The main body is the largest part of the essay, which develops the topic and usually consists of several paragraphs. The conclusion briefly summarizes the main body but does not add any new information. A good essay example provided below shows how these basic principles are applied to create an effective paper.

Guy de Maupassant’s short story “The Necklace” explores the essence of human suffering from philosophical and psychological points of view. It may appear that the main aspect of this story is its final plot twist, which reverses the reader’s understanding of the described events. However, de Maupassant also skillfully includes a hidden discussion about why people are unhappy. The unnecessary hardship of the main heroine over the lost necklace reveals that the faults of human mind cause people to suffer when all suffering can be easily avoided.
Mathilde wastes ten years of her life to repay the debt which is not as tremendous as she thinks. When she loses the borrowed diamond necklace, she is too embarrassed to admit it to her friend, Jeanne Forestier, so she chooses to secretly ask for a loan in order to purchase a similar necklace instead. She perceives this decision as the right choice and regards her further suffering because of poverty as necessary. However, when she finally gathers enough courage to reveal the truth to Jeanne Forestier, she finds out that the borrowed necklace was merely a fake, which could be easily repaid. Thus, Mathilde bought a new real necklace, delving into debts and ordeals, but she could have easily avoided it if she told the truth in the beginning of the story. Her suffering was completely pointless, although she perceived it as the only right decision.

This revelation shows that people often suffer when there is no need to do so. Like Mathilde, they imagine enormous problems when there are only minor troubles because of their own ignorance. If Mathilde initially knew that the necklace was a fake, she could have spared herself ten years of poverty, but her knowledge of her own situation was limited.
All in all, “The Necklace” is an outstanding example of how people suffer because of their own ignorance or subjective understanding. Because Mathilde was not aware that her lost necklace was a cheap fake, she needlessly wasted a lot of money to repay the nonexistent debt. As a result, she doomed herself and her husband for ten years of hardship, and when she finally realized that she could not have suffered, it was too late.