Sample Essay on “The Dangers of Cheques and Bills Thermal Paper” 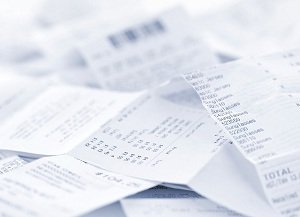 Bad news for those, who like shopping – it may be hazardous to your health. The latest studies have shown that high levels of BPA (bisphenol A) are being absorbed into the human’s skin from cheques and bills receipts. Moreover, those people who prefer using sanitizers before they take the receipt tend to absorb even greater amount of this controversial chemical. And the whole point is that once BPA penetrates into the skin, it enters the bloodstream immediately and cannot be washed off.

The first question that most probably concerns every person is – why is BPA is on the cheques and bills? In reality, thermal paper on which the bills (cinema tickets, airline tickets, lottery tickets and many other items) are usually printed is covered with BPA and some dye. Once the heat triggers, an immediate reaction between the BPA and the dye occurs, and the black print is released.

According to experts of the Environmental Working Group, BPA is an organic synthetic compound that is dangerous to endocrine system even in the smallest amounts. As it’s been reported, BPA causes many health problems, including early puberty, infertility, behavioral changes and even cancer.

All this would sound exaggerated had it not been already proven that bisphenol A in receipts is much higher than from exposures to plastic or other various food packages. And what’s more, BPA from thermal paper is getting absorbed into the human’s blood really fast. Exactly at those levels, a lot of ailments like obesity and diabetes increase.

Although relatively little is known about what health problems can be caused by BPA, detectable amounts of bisphenol A have been found in 93% of individuals over age 6. Besides, a recent investigation conducted by the representatives of the Duke University has also shown that BPA can disrupt the central nervous system. The author of the project, Dr. Wolfgang Leidtke informed that the chemical happens to subtly ruin the natural generation of human’s nerve cells.

The good news is that it’s not difficult to spot thermal paper receipts. All you need to do is to rub the printed side using a coin. Do you see dark mark? Then it’s thermal paper that you’re holding now. In order to avoid BPA in receipts, it’s required to follow some simple rules. First of all, ask for email receipts when possible. In case you have to keep the paper receipts for some time, wallet is not the best place for it. A plastic bag would be a great container for the paper receipts. For individuals, who have to deal with tons of thermal paper, it’s necessary to wear nitrile gloves, just like the doctors do. And finally, washing hands after dealing with thermal paper is a must.

While some of the thermal paper manufacturers have switched to using BPS during the production process, the recent studies prove that BPS is as dangerous for human’s health as BPA and that it can easily transfer to the skin.