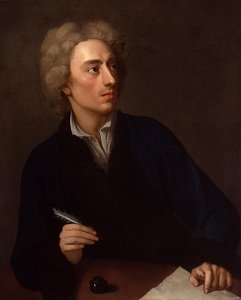 Alexander Pope was an XVIII century English poet, who was best known for his brilliant translation of Homer and his satirical verse. It is important to mention that this historical figure is the third most frequently quoted writer in the famous Oxford Dictionary of Quotations, after his colleagues – Tennyson and Shakespeare.

The poet was born in the capital of Great Britain in a family of Edith Pope and Alexander Pope, who were both Catholics. His education was highly affected by the penal law in force at that epoch upholding the status of the Church of England that banned all Catholic people from teaching on pain of perpetual imprisonment. The boy was taught by his aunt to read. Later, he attended Twyford School from 1698 to 1699. Besides that, Alexander Pope was the student of two Catholic school located in London. One should mention that these schools were illegal, but still tolerated in some areas.

During the school years, Alexander Pope made a lot of friends that influenced his life greatly. One of them, a famous future The Rape of the Lock dedicatee John Caryll was 20 years older than Alexander Pope and had successfully made a lot of important acquaintances in the literature world of the British capital. Caryll introduced young Alexander Pope to a minor poet William Walsh and ageing playwright William Wycherley, who did their best in order to help young poet to revise his very first work called “The Pastorals”. Besides that, Alexander Pope also met Martha and Teresa – the Blount sisters, both of whom would become his friends forever since. They were among people who inspired him the most.

Alexander Pope is most known for his famous work called “An Essay on Criticism” that was first anonymously published in 1711. The man began to work on it early in his career and it took almost three years to get the work done.

At the time, when “An Essay on Criticism” was published, a heroic couplet style in which it was created became a brand new, significant genre in literature, as well as Alexander Pope’s most ambitious work. It was his attempt to both identify and refine his personal positions as a critic and a poet. The masterpiece was known to be a reasonable response to an ongoing discussion of the issue regarding the fact whether the poetry should be created in accordance with the natural laws or according to the artificial rules that were taken from the classical past.

The poem starts with a debate on the standard rules that govern in the world of poetry and by which a critic passes judgment. The author give his comments regarding the classical writers who faced with such standards and the authority that Alexander Pope believed must be accredited to them. Besides, he also talks about the basic laws to which every critic must stick to in the process of critiquing the poetry, as well as highlights that critics play an important role in aiding poets with their hard work, but not attacking them. Proceeding to the final section of the work, one can see that Alexander Pope discusses the virtues and moral qualities inherent in a perfect critic, who, as the author believes, is also an ideal man.

To sum up, Pope was the most important poet in England in the XVIII century right before the Romantics. Being highly concentrated on the ethical, political and philosophical subjects, Alexander Pope brilliantly handled the heroic couplet with exceptional flexibility!