On the Usefulness of Clichés

Blog Home > Writing Tips > On the Usefulness of Clichés 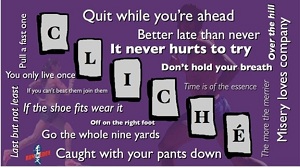 Why does everybody seem to hate clichés so much? Whenever a writer or a public speaker makes use of them he is invariably being mocked for failing to find a better, more original way of expressing the same thought. He becomes the subject of sarcastic remarks concerning his literary or oratory abilities – just because he resorted to one of these formulaic expressions in his speech or writing.

Really, if we all hate clichés so much, why are all people so prone to use them? Whenever a not very skilled writer or speaker has to deliver a speech or write a text he automatically resorts to the despised clichés, stock phrases that appear to be perfect in this particular situation. It seems that our mind, when faced with an unfamiliar challenge, grabs the most typical and easy-to-use phrases and constructions without thinking whether they are hackneyed or not.

Then, maybe this is the reason we use clichés? Perhaps in them we see formulas for expression of specific thoughts, ideas and situations, formulas that are perceived as such by the majority of English-speaking people?

It may work in the following manner: for example, a public speaker says before he draws the conclusion of his speech “When all is said and done…” and introduces the final thought. The construction is incredibly clichéd and as such should be criticized and deemed unworthy of use; but it performs one very important function in the speech: it signals that it draws to an end, and that listeners have to prepare to listen especially carefully if they want to catch the most important point the speaker is about to make.

It is a kind of sign marking in speech: these clichéd structures are so stable and well-known to all people who know the language that they are able to draw additional information from them. “On the other hand”, “Time will tell”, “It wouldn’t be an exaggeration to say” and other similar phrases carry zero meaning and aesthetic value – they have been in use for so long that any originality was scrubbed off them by generations. But they allow the listener or reader to mark the transitions in text, which is especially important in oral speech, where there is no punctuation.

Perhaps it is the reason why clichés are generally much more frowned upon in written speech rather than in oral. Firstly, when the text is perceived via hearing it is much easier to miss them; secondly, we simply need them to better understand the speech we hear.

However, it is worth noting that public speaking and writing do call for creativity – if you call yourself a writer or an orator you are supposed to be able to express yourself differently from other people. And it won’t do to rely solely on clichés, because it eliminates your value as a writer.

What they are really good for is everyday speech – we don’t need a lot of creativity in our mundane communication, and clichés provide us with a never-ending stock of useful phrases.

5.00 avg. rating (96% score) - 1 vote
This entry was posted by Cristian Dorsey in Writing Tips and tagged