Makerspaces Are Taking over Campuses! 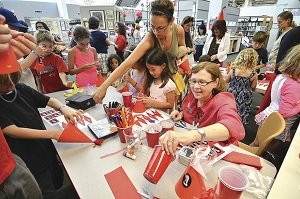 When we speak of a markerspace, it’s all about a physical location, where everyone is welcome to gather in order to share their knowledge and skills, work on various projects and build. Makerspaces have a wide range of tools, as well as enough space in any environment without academic community, be it a community education center, library or campus. Typically, the makerspace is referred to as a hackerspace and is usually associated with graphic design, engineering and computer science fields. However, on campus, the makerspace is actively used by the arts as well.

The idea of creation of a collaborative space for creative endeavors was especially successful in education, where excellent combination of conference room, shop and lab goes perfectly with the hands-on exploration.

How Does It Work?

Makerspaces have been inspired greatly by the so-called hacker culture. That is why many of them still serve as places for hardware development, technological experiments and prototyping of the ideas. But the fact is that many other professional teams are using these fee-based services in the areas other than techs or engineering. Since makerspaces are open for any sort of unscheduled and informal activities, in some classes, an organization will provide scheduled classes. They usually focus on a particular skill, such as woodcarving, soldering or coding. There is a great assortment of supplies on hand, like gears, cardboard, batteries, wood and plastic, in every makerspace. However, there are some items that are typical for the makerspaces, such as 3D printers and microcontrollers. Used by college and university students, makerspaces have become exceptional zones for self-guided, informal learning and sharing interests with colleagues with the same viewpoints.

Originally, the makerspace was known only in a non-academic environment as a powerful learning force. One of the legends says that initially it was Milwaukee Makerspace, where the history began. This is where the public was invited to attend various meetings, and share learning skills in a dynamic studio environment. The makerspace was equipped with giant wind chimes, electric cars, mini robots and multiple modifications for the musical instruments.

As for the universities and colleges, they have also been quick to recognize how grandiose the new idea for learning was. A good example here is the Case Western Reserve University, where a well-known ThinkBox invention center will soon expand to a 50 000 square feet of space. As for the Wheaton College, they provide a huge Wheaton Autonomous Learning Laboratory, where students have a makerspace to sculpt, embroider, weld, solder and work on creative projects. At the Georgia Tech Invention Studio, college students have an opportunity to request special funds for the projects in the form of Maker Giants. The most encouraged are the multidisciplinary project and the winners should work on the projects at the Invention Studio.  All the accomplished projects are later getting into the portfolios at the Georgia Tech Capstone Expo.

Makerspaces give students a unique chance to keep the learning process under their control as they take the projects ownership and avail of emerging technologies and comfortable experimentation.