The Bretton Woods Agreement: the Purpose, the Effect and the Basic Aspects

Blog Home > Essay Samples > The Bretton Woods Agreement: the Purpose, the Effect and the Basic Aspects 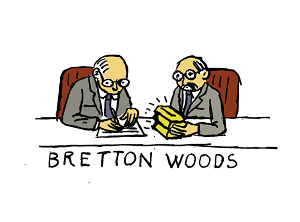 What is the Bretton Woods System? Originally it was monetary management system that initiated the brand new monetary order. If you take a look at the very definition – Bretton Woods System – you will notice that the name comes from the location of the meeting where all the agreements were composed. In other words, we are talking about Bretton Woods, which is located in New Hamshire. Back to those days, this meeting took place in 1944. The agreement of Bretton Woods was itself responsible for set up of the international Monetary Fund. According to the viewpoints of the majority of experts, the Bretton Woods System was a solid attempt to stay away from the worldwide disasters in the segment of economic (just like the ones that took place in the 1930’s.)

Talking about the effect of the Bretton Woods agreement, it is highly important to mention that the system as a whole established the United States Dollar as the reserve currency of the whole globe. The Bretton Woods demise started in 1971. It was the year when Richard Nixon took the whole country off of the Gold Standard in order to stem the gold outflow.

By 1976 all the basic principles of the Bretton Woods agreement were completely abandoned all together. As the result, the currencies of the world were once again free floating. In other words, the Bretton Woods became a crucial event for the Forex fans for the reason that it was the very beginning of the whole Forex trading.

The Bretton Woods system was dissolved within the frame times – from 1968 to 1973. In 1971, the President of the United States of America Richard Nixon announced that the “temporary” suspension of the national currency’s convertibility into gold. While the currency of the United States of America was struggling throughout the most of the 1960s within the parity that was set at the Bretton Woods, the crisis was the very beginning of the system breakdown. All the efforts that were exerted in order to fix the Bretton Woods system failed. And thus, by March 1973 all the major currencies began to rapidly float against each other.